As the pandemic wears on and the year draws to a close, I pull three cards from the old deck. First comes the Sun, then the Nine of Cups, and finally the Emperor, laid before me from left to right. What message is offered by the Tarot today? 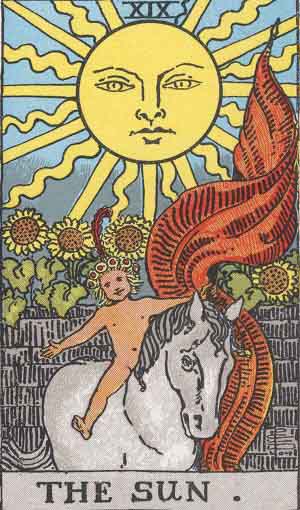 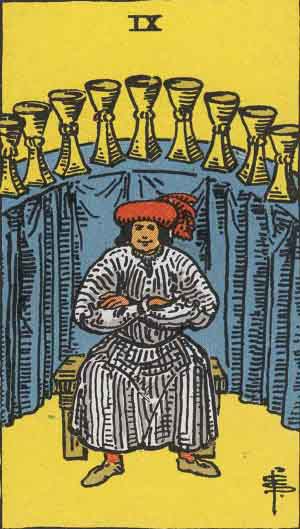 My attention is drawn to the well-fed, rather self-satisfied-looking man in the middle of the spread. Unlike the two cards on either side of him, there is no natural background or scenery in this card — it is just a man on a bench, surrounded by a curved table on which nine cups rest. This card seems less striking than the two Major Arcana cards that surround it — the Nine of Cups has neither the glorious radiance of the Sun nor the stern and disciplined power of the Emperor. In fact, the plainness of the card is what stands out about it; it’s like the Nine of Cups is held in a little pocket — or a cup? — formed by the Sun and the Emperor. Notice how the curved table behind the seated man forms a cup to hold him.

What does this mean to us? Most of us would probably like to feel a little safer right now, a little more protected. We’re in the middle of a pandemic that has dragged on since spring, and we’ve just finished a brutal election cycle that has shaken our confidence in American democracy. We’re tired of this. But are we the man in this protective pocket, or are we outside of it? How can we create our own protective pocket?

This year has pounded our emotional resilience relentlessly. This emotional toll
is where the other two cards come to help, and the energies of these two cards are very different. The Sun represents youthful innocence in its ancient wisdom. The white horse and the child riding it represent purity in its power. The gray-bearded Emperor, on the other hand, represents not the eternal timelessness of the Sun, but the wizened visage of a mortal person who has reached great age and strength of will. Where the Sun is energy radiating in all directions, the Emperor is solid and formidable. His energy is precise and controlled.

These are opposing energies, but both are needed. The Sun is the inner joy and peace we need to calm us and heal the scars of loneliness, anger and frustration. It is the literal light at the end of the tunnel. This is what keeps us going, continuing our journey from day to day, just as the Sun travels day to day from east to west. The Emperor is the strength and fortitude we need to keep moving–the ability to trust ourselves, our abilities and our judgment. The Emperor keeps us walking, following the bliss of the Sun, which is sometimes in reach and sometimes not. The Emperor keeps us walking, even when that bliss is out of reach.

These are the twin gifts offered by the Sun and the Emperor. And they fulfill not just our need for protection, but our need for growth as well. Keep these two cards in mind as you move forward into the new year. Because even if we can’t always reach the bliss of the Sun, even when we can’t always see the light at the end of the tunnel, we believe it’s there, we know it’s there, and we keep walking towards it.